I've been chasing a crocus misrendering bug show in a qt trace. 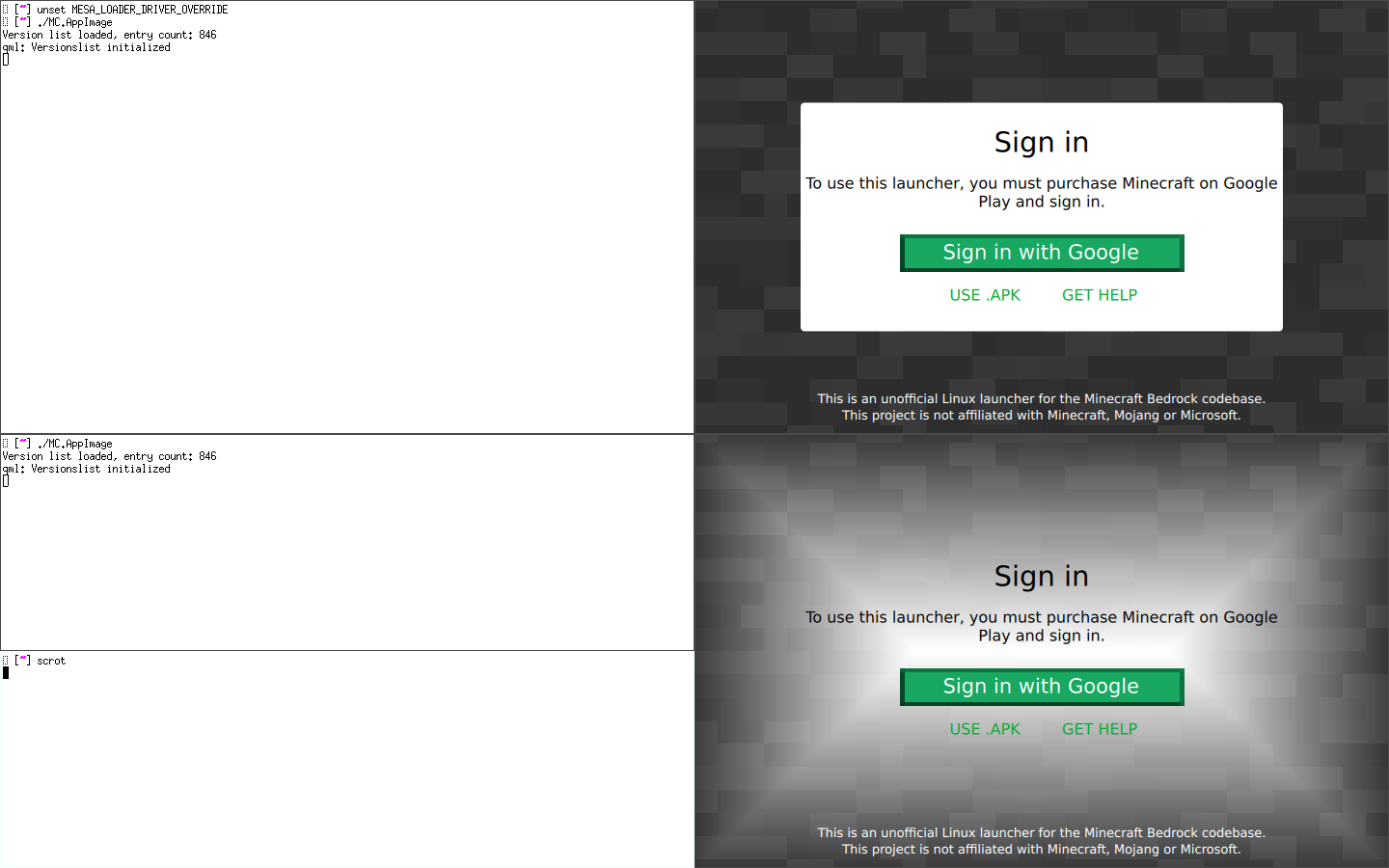 The bottom image is crocus vs 965 on top. This only happened on Gen4->5, so Ironlake and GM45 were my test machines. I burned a lot of time trying to work this out. I trimmed the traces down, dumped a stupendous amount of batchbuffers, turned off UBO push constants, dump all the index and vertex buffers, tried some RGBx changes, but nothing was rushing to hit me, except that the vertex shaders produced were different.

However they were different for many reasons, due to the optimization pipelines the mesa state tracker runs vs the 965 driver. Inputs and UBO loads were in different places so there was a lot of noise in the shaders.

I ported the trace to a piglit GL application so I could easier hack on the shaders and GL, with that I trimmed it down even further (even if I did burn some time on a misplace */+ typo).

Using the ported app, I removed all uniform buffer loads and then split the vertex shader in half (it was quite large, but had two chunks). I finally then could spot the difference in the NIR shaders.

What stood out was the 965 shader had an if which the crocus shader has converted to a bcsel. This is part of peephole optimization and the mesa/st calls it, and sure enough removing that call fixed the rendering, but why? it is a valid optimization.

In a parallel thread on another part of the planet, Ian Romanick filed a MR to mesa https://gitlab.freedesktop.org/mesa/mesa/-/merge_requests/12191 fixing a bug in the gen4/5 fs backend with conditional selects. This was something he noticed while debugging elsewhere. However his fix was for the fragment shader backend, and my bug was in the vec4 vertex shader backend. I tracked down where the same changes were needed in the vec4 backend and tested a fix on top of his branch, and the misrendering disappeared.

It's a strange coincidence we both started hitting the same bug in different backends in the same week via different tests, but he's definitely saved me a lot of pain in working this out! Hopefully we can combine them and get it merged this week.

Also thanks to Angelo on the initial MR for testing crocus with some real workloads.

November 11, 2021
Last week I mentioned I had the basics of h264 decode using the proposed vulkan video on radv. This week I attempted to do the same thing with Intel's Mesa vulkan driver "anv". Now I'd previously unsuccessfully tried to get vaapi on crocus working but got sidetracked back into other projects. The Intel h264 decoder hasn't changed a lot between ivb/hsw/gen8/gen9 era. I ported what I had from crocus to anv and started trying to get something to decode on my WhiskeyLake. I wrote the code pretty early on, figured out all the things I had to send the hardware. The first anv side bridge to cross was Vulkan is doing H264 Picture level decode API, so it means you get handed the encoded slice data. However to program the Intel hw you need to decode the slice header. I wrote a slice header decoder in some common code. The other thing you need to give the intel hw is a number of bits of slice header, which in some encoding schemes is rounded to bytes and in some isn't. S
Read more

November 23, 2021
I was interested in how much work a vaapi on top of vulkan video proof of concept would be. My main reason for being interested is actually video encoding, there is no good vulkan video encoding demo yet, and I'm not experienced enough in the area to write one, but I can hack stuff. I think it is probably easier to hack a vaapi encode to vulkan video encode than write a demo app myself. With that in mind I decided to see what decode would look like first. I talked to Mike B (most famous zink author) before he left for holidays, then I ignored everything he told me and wrote a super hack. This morning I convinced zink vaapi on top anv with iris GL doing the presents in mpv to show me some useful frames of video. However zink vaapi on anv with zink GL is failing miserably (well green jellyfish). I'm not sure how much more I'll push on the decode side at this stage, I really wanted it to validate the driver side code, and I've found a few bugs in there already. The WIP hac
Read more